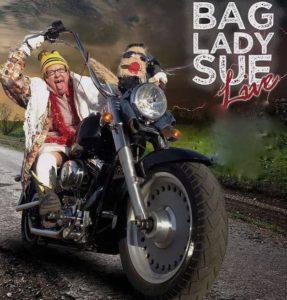 Well look who’s performing two (2) shows at Thunder in the Hill Country 2019 Rally on Friday and Saturday nights. The one and only BAG LADY SUE. She is so hilarious she will make you pee your pants in laughter.

Her resume includes sharing the bill and stage with or opening for countless national artists from the great Sam Kinison, to Kid Rock, Lynyrd Skynyrd, Hank JR. Brett Michaels, and Bad Company to name a few.

She has been headlining huge biker rallies, comedy club and night club shows for over 20 years! From headlining her own Las Vegas [email protected] The Fabulous Four Queens Hotel and Casino to packing a crowd out to the road @ Daytona and Sturgis’ Broken Spoke Saloons, Glenco and The Beaver Bar.

From the bush country of Alaska to the beaches of Florida, and from Texas to New York, everyone simply adores her. Her humor touches on subjects often not tackled by female comediennes and her no holds barred approach to the secret, private sides of human nature AND sexuality, actually helps release the inhibitions of those who come to see her. Even those who are very conservative, find themselves opening up and letting it all hang out! The “Bag Lady” character is simply adorable and while watching her, you forget “who” is really underneath! Bag Lady Sue pulls off content other female comics couldn’t or wouldn’t touch! Don’t miss this unforgettable show. Get preregistered now and get one of our famous event shirts FREE.